Softlove woke abruptly to the racket of men running and shouting; as he gathered his wits he could here Ruffbrute’s voice rising above the clamour, “Stand to my lovelies, c’mon, up and at ‘em”. He rose quickly, shook the sand from his uniform and drew his service revolver. “Right then” he thought to himself “lets see what’s going on in paradise today.”
Softlove’s Drift
It had been three long, hot days since Softlove had been rescued. He was now in the unenviable position of commanding of a rag tag column of soldiers and civilians that he and his men had rescued along the way to New Victoria.  A column that consisted of regulars and friendly Martians, as well as settlers and civilian officials, a column that was low on food, water, ammunition and most anything else they needed.
The previous day a light scout ship had landed after spotting the column and its captain; Lt A A Milne RN, had spoken to Softlove.  Lt. Milne explained that the Martian attack was much more widespread than was initially thought, with many of the smaller settlements coming under attack at the same time as the city.  He and his crew were picking up as many people as they could, and dropping supplies where necessary; especially to the die-hard settlers were refusing to give up their farmsteads. Milne had also reported that a bad sandstorm was approaching and suggested Softlove lead his column to a nearby abandoned farm so they could let it pass. In the meantime he would take back the most seriously wounded and arrange for one or more of the larger aeroneffs to rendezvous with the column at the farm and take it back to the safety of New Victoria.
The sandstorm had been truly awful; the worst Softlove had ever experience on Mars.  He had just managed to get the column to the farm when it hit, throwing everything into disarray; the few pack animals they had were lost and it was impossible to post sentries for fear of losing them.  The column had just hunkered down where it stood, making use of the little protection afforded by the farm buildings.
The storm raged throughout the night and it was dawn before the column was able to get any respite from the bighting winds and stinging sand; but while dawn may have brought respite from the storm, it brought with it an even greater danger, Martians!
Ruffbrute had been awake for most of the night, he and Cpl. Bloward had been struggling with the wagon covers that protected what little remaining rations and water they had from the storm.  Now, as he and Blowhard sat atop the wagon sharing some sausage, he caught sight of a Martian warband moving rapidly towards the farmstead.  He turned to Bloward calmly telling him, “OK lad, get your bugle and sound the alarm, ‘ere we go again.”
Medical orderly William Tickel tends to Private Partts 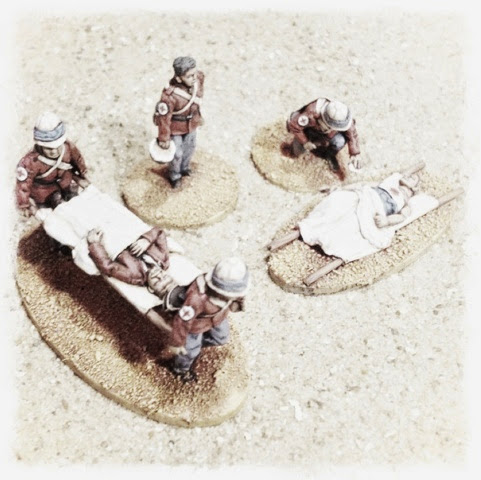 Posted by jimbibbly at 23:12 No comments: 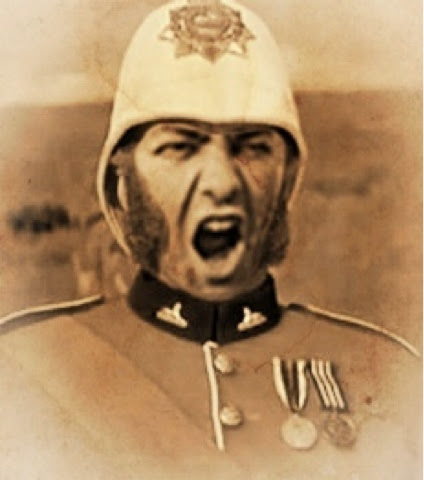 The game was played on a 6 x 4 table using a mix of figures from Perry Miniatures and Red Planet Miniatures.  We used a set of home grown skirmish rules, inventively entitled Red Planet Adventures, which use simple mechanisms as lots of d10s.  No doubt they will appear as a free download somewhere 'Soon'TM once they're sufficiently tweaked.
Terrain was laid out as below, with Ruffbrute and his men entering in the centre of the short edge on the far right.  There were 24 markers placed randomly around the board numbered 1 - 24 underneath.  As Ruffbrute and his men searched these revealed various items and characters, as well as additional troops to swell the search party and Martians to trim it down .  Marker number 1 was Softlove himself.  The whole game lasted a couple of hours. 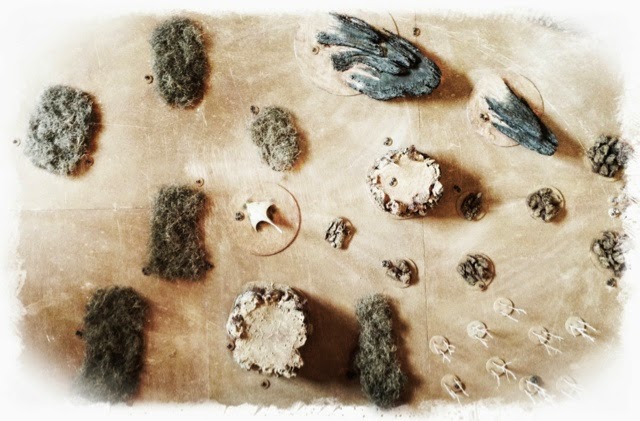 Ruffbrute and his men pose for the obligatory press photo 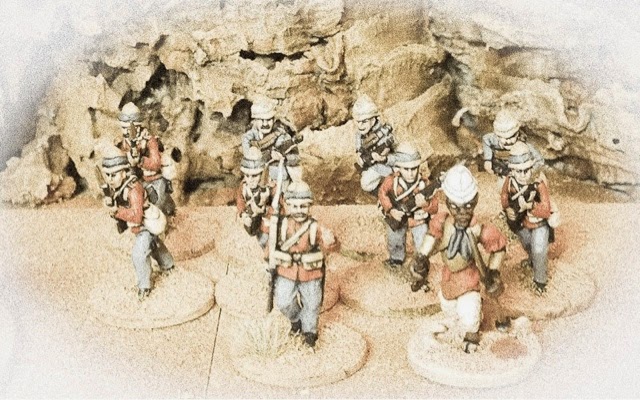 Before setting off to find Softlove 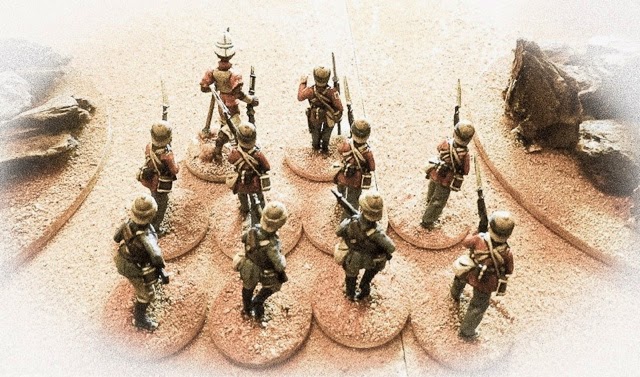 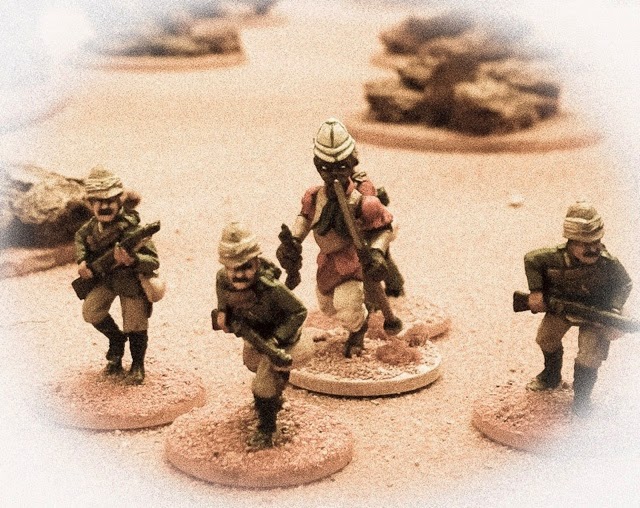 Who promptly discover a group of Martians 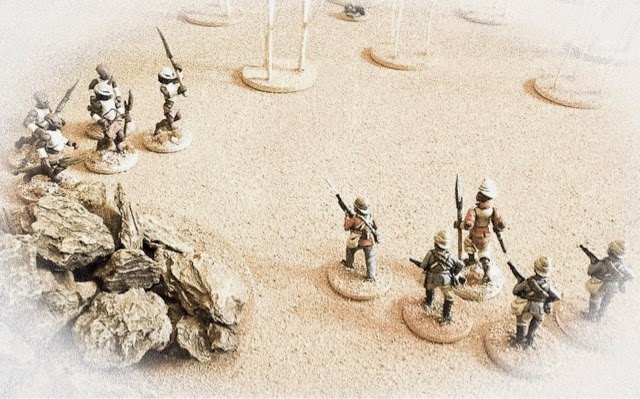 Who charge into contact (the Martian reactions were determined by dice roll, and varied from Ambush to Flee) 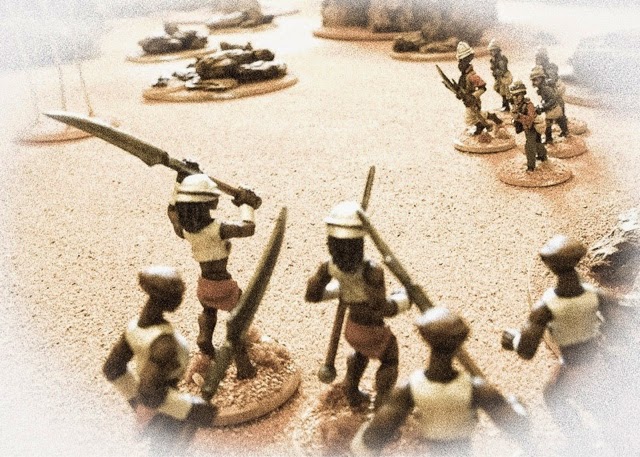 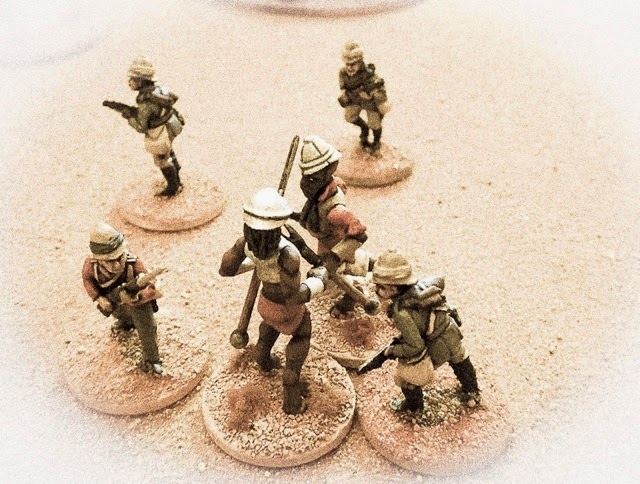 Meanwhile Ruffbrute has discovered some soldiers returning to the city and dispatches them to investigate a cave in the nearby mesa.  Unfortunately for brave lads the cave turns out to be full of Martians who have been sheltering from the sandstorm. 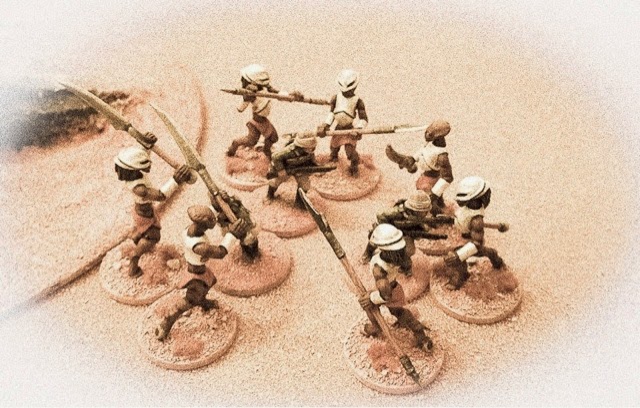 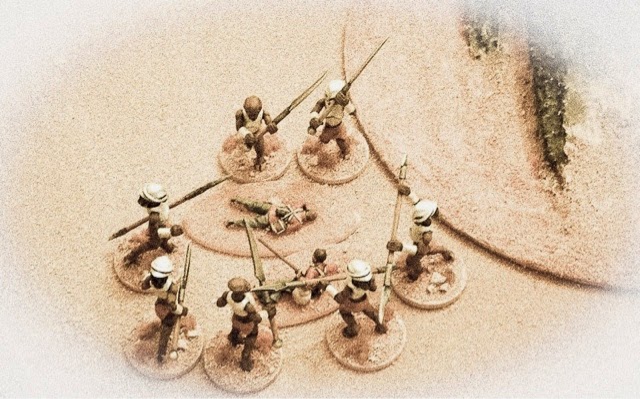 With fatal results for all the redcoats involved 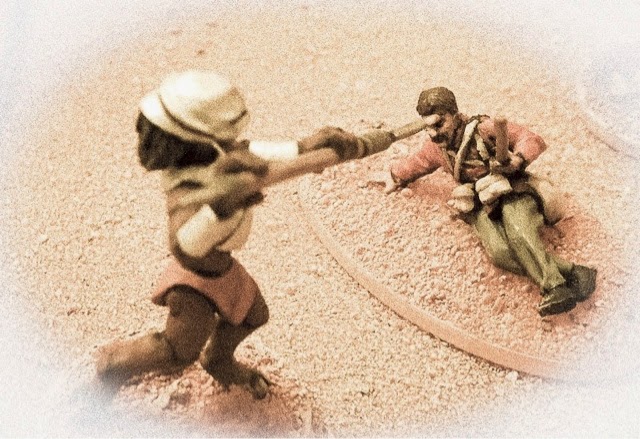 Unaware of the carnage behind him, Ruffbrute presses forward, picking up another straggler from the Camel Corps 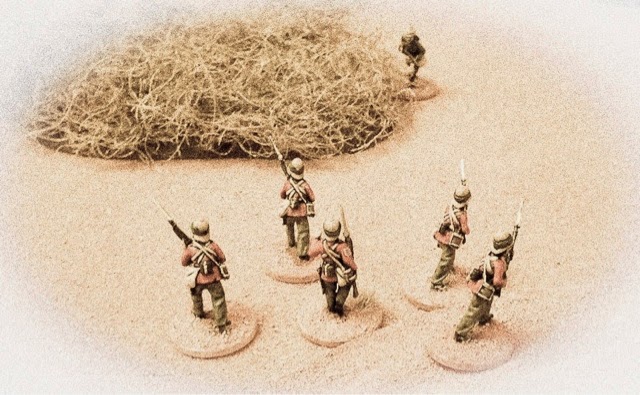 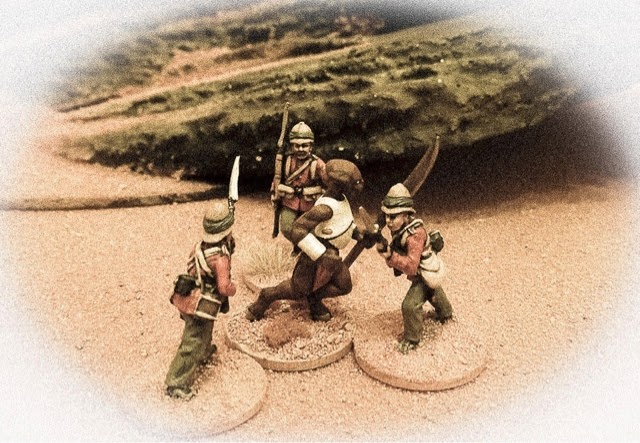 Aak-Nak Fish, supported by one of his men, presses forward on the left flank adding more and more stragglers to his section 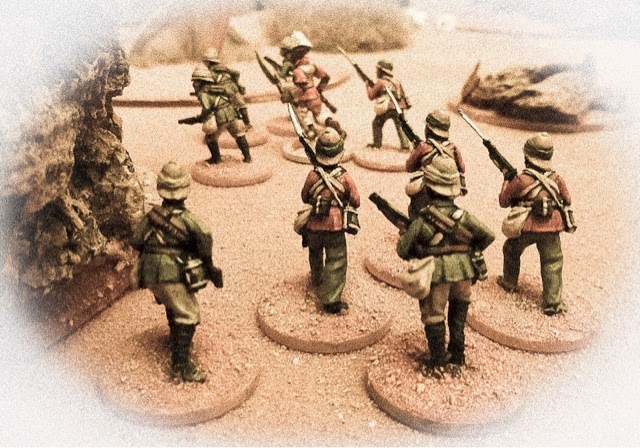 Ruffbrute's advance is watched from a distance 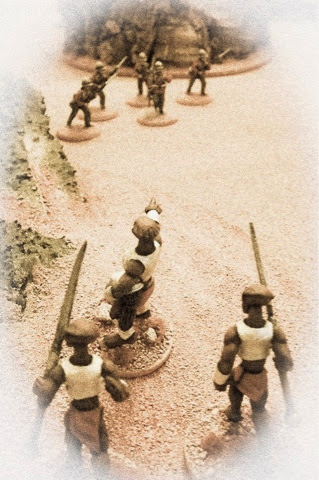 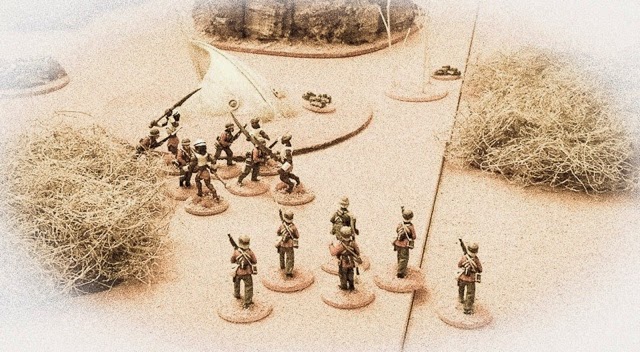 Aak-Nak Fish and his men come to the aid of Professor Artemis E'ffakt, Professor of Ancient Studies, University of Cairo, (Art to his close friends) who they find hiding amongst the martian thornbush. And just as Ruffbrute is starting to lose hope, he notices a red coated figure ahead in the thorn bush.
"Captain Softlove Sir, pleased to be finding you in good 'ealth Sir.  If you care to be comin' along with us, there's a good chance we can 'ave you back in town in time for tiffin." 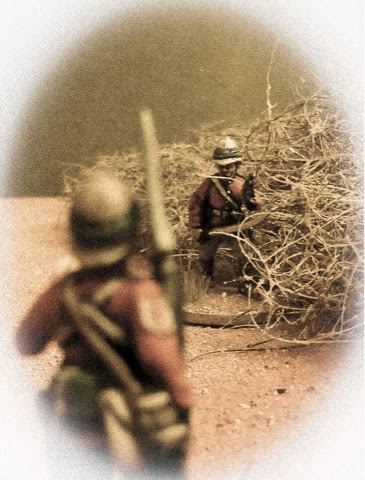 At this point the game ends but Ruffbrute and Softlove will return...
Posted by jimbibbly at 14:50 1 comment:

Being the Continuing Tales of Adventures of various Dramatis Personae on the Red Planet:
'Sergeant Rawley Ruffbrute looked over the canal to the Martian plain beyond. As he surveyed the remnants of yesterday’s battle, he cursed his luck and mumbled to himself, “‘Ere we go again”.
Ruffbrute was Captain Sebastian Softlove’s orderly and had been since the young officer joined the Prince’s Own Regiment at the start of the Martian campaign some five years earlier.  He’d grown to like him too; Softlove was a decent officer who knew how to soldier, was fair to the men and wasn’t afraid to lead from the front.
Softlove was providing an escort to reporters of the Illustrated London News when the Sky Martians attacked New Victoria, but now he was missing in action and feared dead.  One of the reporters, Harry Wallop, had reported seeing Softlove and his men overwhelmed by the Raas-Taa-Faari tribe as they defended the vehicles carrying the pressmen.  The fight had been vicious and bloody, and Wallop was convinced that The Prince’s Own had been slaughtered to a man. 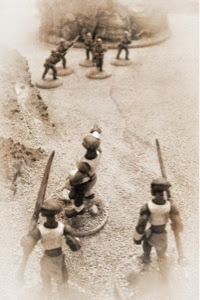 At the time of the attack Ruffbrute had been leading an independent patrol and wasn’t with his captain when he fell, a fact that had been preying on his mind.  If he’d been with Softlove at the time things may have turned out differently.  He needed to be certain that Softlove wasn’t still alive, he couldn’t leave his friend out there wounded and at the mercy of the heathen Martians.
However Ruffbrute’s desire to find his captain was not solely out of a sense of loyalty, he had another reason too; money.  A few days prior to the battle, Softlove had spoken to him about an opportunity for them both to become wealthy men. Whilst entertaining Everelda Dyke, one of New Victoria's debutantes and niece of the renowned Professor von Stypher Dyke, Softlove learned of how her brother Everard had discovered a valley full of Martian tombs. By the end of an enjoyable but very exhausting evening, the captain had all the information he needed to mount a small expedition to the valley.  Unfortunately for Ruffbrute he had none of the details, they were all still in Softlove's head; if he was to become a rich man he had to find his captain alive. 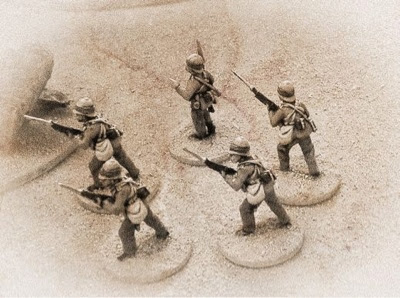 Ruffbrute shouldered his rifle, turned to the ragtag group of men at his side and said "C'mon lads, let's get to it." '
Sergeant Rawly Ruffbrute: 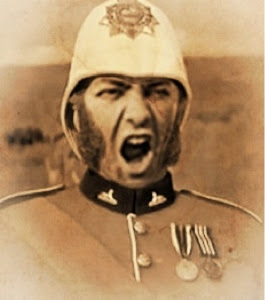 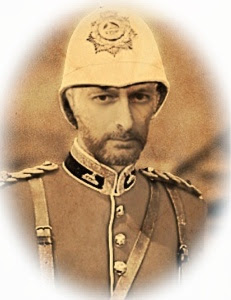 Posted by jimbibbly at 22:16 No comments: