A word on Martian Askaris

Since the human colonists have brokered contact with the indigenous City Martian population there have been those few City Martians that have wanted to help the humans better themselves on Mars and a recent offshoot of this is the forming of several units of native askari.
These native troops see an advantage of being with the humans in the way that they are able to occasionally see off the ferocious Sky Martians; and with their technology, to possibly put the Sky Martians in their place once and for all. The City Martians have always been prayed upon by the Sky Martians for many centuries but now they feel that the time has come to assist the humans. 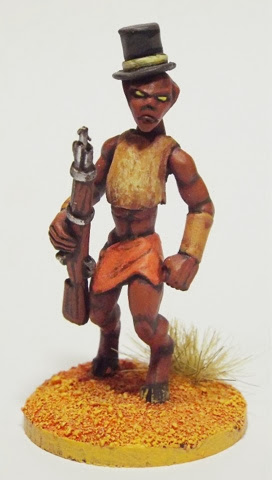 Not all City Martians feel the same way; indeed, there are some who would like nothing better than to see the humans return to their home in the heavens but the pro-human movement is becoming larger with the more frequent attacks by the Sky Martians helping to push the waverers over.
Not every Sky Dwelling Martian revolted against the Earther Great Powers during the uprising of 1889. Whether it be a simple blood feud between clans, or forward thinking individuals who looked on the Earthers as their future salvation many turned against their brethren and took up arms in favour of the Earthers. Although the humans have noted that it is best to keep the Sky and City Martians in separate units and in differing areas in case fighting breaks out between them. 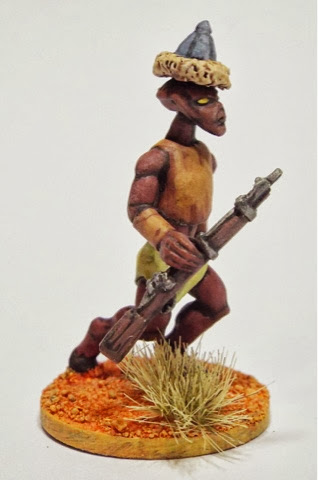 The British and the Japanese have been the first nations to fully utilise the natives into effective fighting units; Querns own Martian Rifles (British) and The Imperial Askari Corp (Japanese) being two units of note. Equipping the Martians is proving to be a slight problem due to the Martian physiology and so for the time being local costume is being worn and supplemented by human head gear and the occasional waistcoat or short jacket. Their fascination with Earth fashion, in particular hats, together with their intense need to retain their native appearance made them a curious sight to behold around New Victoria. They've adopted Earther weapons too, but again clung onto their fierce Martian fighting glaives and blades where they can. This does give the askari a haphazard appearance but they are proving their worth on campaign being utilised as scouting troops and flankers. The other point of note is that the Askari have started to have been given human names as the Martian language can be quite fierce on the throat, a turn of events that they seem to relish. 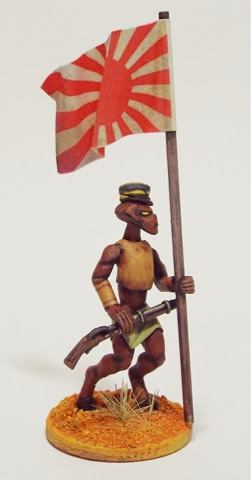 Actual equipment is not in vast supply on Mars with normal supply runs from Earth sporadic at best and until the proper foundries and powder mills are set up and running properly the askari have to make do with whatever spare rifles are available; sometimes even primitive muskets have been brought into use. 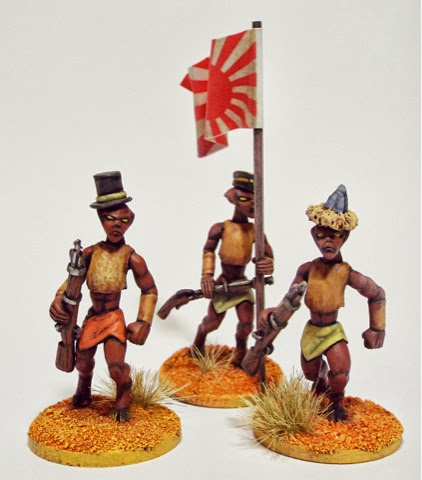 As the struggles with the Sky Martians continue and the ranks of the askari swell it may turn out that these troops are put in 'front line' roles and even be given command of heavier equipment as and when it becomes available. But only time will tell...
Posted by jimbibbly at 13:11